In most refineries, the scaffolding is an integral part of the daily work. Whether it is regular maintenance work such as inspections, secondary repairs like changing a flare tip or replacing a valve, or a comprehensive turnaround project in which an entire production unit is shut down. Scaffolding is always in use to reach every nook and cranny within the miles of pipes, towers and tanks.

At the refinery in Illinois, which produces more than 300,000 barrels of oil products per day, thousands of scaffolds are in use at all times. This is equivalent to about 2,800 tons of mobile working platforms spread over hundreds of acres, and requires a team of workers, sometimes more than 300 people, to handle the necessary coordination and erection and dismantling of all these scaffolds. In a large refinery, the tons of scaffolding components used every day are usually lifted by hand using ropes and pulleys to the areas where they are assembled - often up to 30 metres high. This is not only slow, but also requires a lot of manpower. The alternative - until now - was to use cranes. Cranes not only cost up to 2,300 € per day, they are also not very manoeuvrable. In the jumble of material that prevails in a modern refinery, cranes are therefore unable to reach some areas.

"All this has changed at our refinery," said Richard Wooley, BrandSafway's site manager at the plant. The decisive difference is the new free-standing Böcker Scaffolding Lift Junior G HD 24. Due to a platform specially developed for scaffolding which can be directly hooked into the rails without any additional carriage, the lift can lift up to 250 kg of scaffold at a speed of up to 48 m per minute over 23 m. The scaffold lift can be easily repositioned within the plant and costs only a fraction of what a crane would cost. "This lift is an example of our ongoing focus on improving performance and increasing productivity," Wooley explained. "It increases efficiency, it adapts to the often cramped situations in the refinery and offers our employees the highest level of safety. The plant management is delighted because we can respond more quickly than ever if someone needs access to a particular area, even if it is a high area and tons of scaffolding have to be erected. With the free-standing scaffold lift, this is much faster," he said. "With the lift, the intention to lift scaffolding segments has been transformed from a task requiring up to ten people to a two-man job," Wooley added, "and that makes manpower available for the actual erection of the scaffolding.

A long wheelbase guarantees smooth handling of the platform even under full load. The platform floor of the Junior G made of checker plate is particularly characterised by its load capacity and wear resistance. Additional holders for scaffold tubes facilitate the transport of scaffold elements and ensure safe material transport. In addition, shelves also allow the height transport of small parts. The low loading height of the Böcker Scaffold Lift guarantees a comfortable operation. As the lift can be positioned at any desired height, unloading from an ergonomically good position is also possible.

"When you think of safety improvements in terms of erecting scaffolding, preventing falls is perhaps the first thing that comes to mind. But there are other, less dramatic potential injuries that can occur and that the new Junior G helps prevent," says Pamela Brangenberg, BrandSafway's safety officer at the facility. "These include muscle tensions and sprains, pinching and crushing injuries. The use of the Böcker scaffold lift reduces the potentially dangerous working hours for our team members by about 18 to 24 working hours per day", she said and added: "Safety is the ultimate goal - but improved efficiency and increased productivity are the bonuses".

BrandSafway primarily uses the elevator's gasoline engine, although the elevator can also operate with its built-in 220V AC motor when conditions allow for electrical power. The German-built elevator can be moved around the site with a half-tonne truck and its position can easily be optimised by two people by hand. Unlike a crane, it can therefore be quickly repositioned several times during the course of a working day.

Annual cost savings of 238,000 €
The Junior G from Böcker used by BrandSafway initially led to a saving of 10 to 15 working hours per day, which corresponds to an annual cost saving of more than 238,000 €. The lift has already been used for hundreds of scaffoldings of the plant.

In one case it was used for the construction of a scaffold which was needed for the maintenance of a very high part of the installation. As the free standing lift was able to move the scaffold segments up to a height of 21 m, expensive crane time was only needed to erect above this specific area, saving money and reducing the construction time by two days.

"The time taken to erect and dismantle the scaffolding for internal heating (a major project in the plant) exceeded the strict schedules," said Wooley, adding: "When we think about how we can do something better, we don't just mean faster or cheaper. It's about taking care of the customer in every way. More efficient methods often mean safer methods. This is the key to our concept and to what we want to achieve in every job".

More information about the Junior G can be found here. 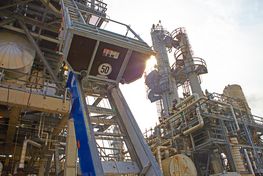 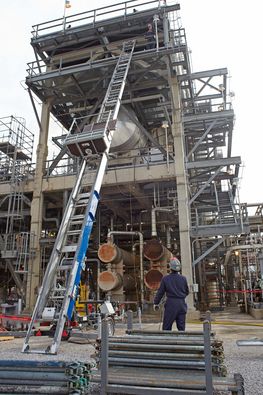 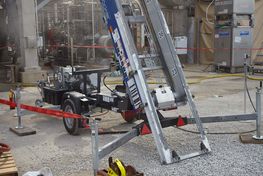