In mid-February, a brand-new Böcker truck-mounted crane AK 52 on a 4-axle vehicle made its way to the Eifel region in order to reinforce the team of the roofing company Esch & Scholzen.

The roofing company from Schleiden decided to acquire the strongest Böcker crane in an aluminium-steel construction which has a comparatively low dead weight despite its enormous performance. With a gross vehicle weight of only 32 t on a 4-axle vehicle, the powerhouse lifts a load of three tons at a range of 17 m at a maximum height of 31 m. Thanks to its ultra-modern mast system with endless slewing range, the AK 52 opens up a huge working area and offers a range of up to 45 metres.

This combination of strong performance values and low weight convinced Esch & Scholzen when selecting the new acquisition. Since many of the company's orders come from industrial construction, a high load capacity and a far reach of the crane are of enormous importance. Heavy loads of around 1000 kg are part of the roofers' everyday work on the construction site. With a possible payload of up to 12 t and maximum extension lengths of up to 52 m (opt. 55 m), the AK 52 lifts all building materials directly upwards without repacking. The easy handling of large volumes and formats on the ground saves valuable time and manpower, which can be used on the roof instead.

For inner-city jobs, the compact design and the space-saving as well as flexible set-up of the truck-mounted crane play an important role for Esch & Scholzen. Equipped with the Böcker outrigger technology, each individual crane outrigger of the AK 52 can be extended and positioned individually in order to optimise the assembly geometry of the crane on site. In addition, the company decided in favour of an AK 52 on a 4-axle truck as the truck-mounted crane in this version achieves the same range with an even smaller footprint width. The small swing radius without extendable counterweights also makes the crane a slim helper should things get tight.

Esch & Scholzen were also impressed by the technical features and the sophisticated control system of the AK 52. The crane is easily operated via the intuitive radio control system with full-colour graphic display. Already during erection, the auto-levelling of the outriggers and a constantly updated reach display enable the crane to be placed quickly and optimally. During operation, several crane functions can be controlled simultaneously. The maximum working range of the crane is automatically released depending on the position of the outriggers as well as the suspended load. The rotation and erection angle limitation can be activated as an additional feaure for monitoring compliance with the available working range. This ensures safe working at all times. The camera technology with image transmission to the display of the radio remote control ensures the best possible view of the working area for the crane operator.

Werner Scholzen, owner of Esch & Scholzen, is pleased with the strong reinforcement of his fleet: "We have decided in favour of the truck-mounted crane AK 52 by Böcker because it lifts even big masses far onto the roof and convinces with its slim body as well as the technical features. The crane makes our daily work much easier because it takes over the strenuous material transport and replaces at least two employees. This is an important argument for us in times of a lack of skilled personnel. In the end, the crane costs less in maintenance and financing than it saves in personnel costs.

At Böcker, we felt very well advised and in good hands. During a factory tour, we were able to see the entire production process in detail, every single production step was openly shown. Afterwards, we tested the AK 52 extensively and finally chose the crane on a Mercedes truck with a powerful engine for the mountainous Eifel region. Already during the first site jobs, it became apparent that the performance values of the truck-mounted crane even exceeded our expectations." 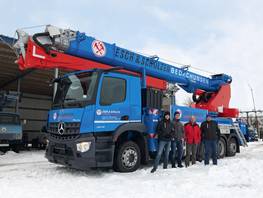 Werner Scholzen and his staff with the AK 52 as a strong helper at their side.