New AK 52 truck-mounted crane can lift 12 tons! Based on decades of experience in the development of innovative lifting technology, Böcker is due to launch what is probably the most powerful crane design in aluminium-steel on the market, thus opening up a whole range of new applications. By expanding its product portfolio to include the AK 52 truck-mounted crane, the family business is now entering a new dimension by showcasing a crane that is capable of lifting very heavy loads to extreme heights. This new development is due to be showcased for the first time with other new products between February 20 and 23 at DACH+HOLZ 2018 in Cologne, and between March 16 and 18 at Böcker Crane Days in Werne. In the UK, the new AK 52 can be admired for the first time at the Vertikal Days, between May 16 and 17, at Donington Park.

The new mobile crane from Böcker demonstrates an outstanding reach for lifting heavy loads while being easy to set-up and operate at the same time. With a maximum payload of 12 tons and an extension length of 52 metres (optional 55 metres), the AK 52 is the most powerful aluminium-steel mobile crane in the 26 tons truck class. With its state-of-the-art hybrid telescopic mast system featuring an endless pivoting range, it opens up a vast operating range while offering an outstanding reach of up to 45 metres at the same time. The powerhouse can extend a one tons load to 34 metres, while reaching a height of 30 metres. This means it can also reach the other side of buildings, thus making it ideal for working on multi-storey buildings, and industrial, glass and façade constructions. A reach of these dimensions is made possible by the fully radio-controlled telescopic boom, which can carry a weight of up to one tons, even in horizontal and extended positions. To make for even more efficient work, the telescopic boom can be extended to any mast position with loads of up to one tons or a loaded work basket attached. Thanks to its powerful cylinder technology, it can extend completely without changing the mast angle even in an almost vertical position.

Despite its huge performance, the rear-axle steering on the AK 52 makes it extremely manoeuvrable and furnishes it with excellent driving characteristics. Thanks to its compact design and small swing-through radius, it is also very flexible in tight spaces. Even when the maximum reach is attained, the swing-through radius is only 2.2 metres, and the turret protrudes no more than 0.9 metres beyond the frame of the carrier vehicle, because, unlike comparable equipment, the crane does not need to be equipped with retractable counterweights. Variable support positions and a large support lift with a high ground clearance also facilitate the set-up on-site. Sensors on each support detect the supporting forces so that the load on the ground is distributed optimally and make sure that the axles retract automatically during levelling.

The Easy-Lock system on the new truck-mounted crane means that it be retrofitted for use as a work platform in a very short time without any tools. Specially developed by Böcker for the AK 52, the work basket is designed for a 600 kg payload and can be hydraulically extended to a range of 3.5 metres during operation, thus offering an extremely large working range, even reaching remote areas. The fact that it can be hydraulically rotated through 400° also makes it extremely flexible.

To keep the operating costs as low as possible, a powerful auxiliary drive on the truck supplies the crane with the necessary power. This drive consumes less fuel and requires less maintenance than separate ancillary drives. It also facilitates handling, since refuelling only has to take place once, while the large tank volume on the truck also means you can operate the crane for longer periods.

The overall power supply for the AK 52 is installed inside the main mast and in the boom, thus providing it with protection against external influences and damage. The closed mast profile prevents foreign objects penetrating inside. The power supply for the support cylinder is protected inside the support housing. Lockable stainless steel storage compartments round off the well-designed range of features.

In addition to their new truck-mounted crane, Böcker will also be showcasing their new AHK 36 trailer crane at the Vertikal Days. The version of the AHK 36 equipped with a petrol engine will work even quieter in future, with improved insulation reducing noise emissions by seven decibels compared to the predecessor model. Another key innovation is the personal safety mode. This new operating mode now allows the trailer crane to be used as a fall protection for workers operating at heights, such as those performing roof repairs. A safety device is suspended from the hook on the crane and connects the worker to the crane over a cable within a specific action radius. This new personal safety mode will also be available for other crane models in future.

The new AK 52 truck-mounted crane and the AHK 36 are both equipped with an intelligent control system which, in conjunction with a modern radio remote control system featuring a full graphic display, allows for simple operation and guarantees maximum safety during all work operations. Among other things, the control technology features an automatic set-up control with an auto-levelling function for the supports, rotation and erection-angle limitation for the mast package during operation, and a 'go-home' function for easy and quick dismantling of the crane. Optional camera technology, with a camera mounted permanently on the mast, now makes it possible for the operator to control blind spots on the radio control display during operations. 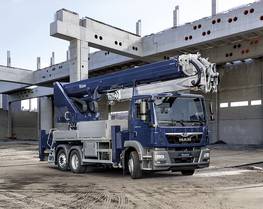